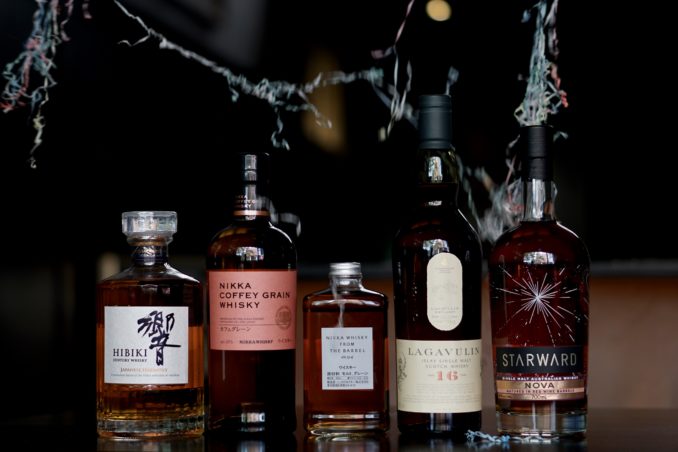 Last month, we launched our first whisky awards, the ‘Peoples Choice: Whisky of the Year’ blind tasting competition saw Melbourne’s whisky community come down and taste 5 of our top selling whiskies, completely blind, and then submit a vote card to crown their top dram.

Before we reveal Melbourne’s favourite whisky for 2019, we would like to thank everyone that took the time to get involved. A month of blind-tasting and vote-casting has lead us to this point, so without further ado, here is Whisky & Alement’s Peoples Choice winner for 2019!

Today, we are proud to award ‘Whisky & Alement’s, Peoples Choice 2019: Whisky of the Year’ to Starward Nova. Chosen blindly by the people of Melbourne, this trailblazing single malt whisky draws influence from the vibrancy of Australian red wines. Some casks for maturation come direct from the winery, un-charred, ensuring the wine’s flavour profile has a prominent impact on the spirit.

A dram that is – both literally and figuratively – close to the hearts of the Melbourne whisky community. The Starward distillery, lies a stones throw from Melbourne CBD in Port Melbourne. From the beginning, Starward was set to be a driving force on the modern Australian whisky landscape, and they continue to excel and exceed expectations. We at Whisky & Alement would like to recognise Starward for their continued consistency, innovation and authenticity, but most of all, for the strides they have made here on Australian shores as well as internationally, not just for themselves, but for the entire Australian whisky industry.

“Having your whisky chosen by patrons – above all other whiskies – in a venue like Whisky & Alement is really quite something – the best kind of recognition – as it is people voting with their hip-pocket. Despite having won lots of “best in classes” and other trophies over our short 6 years, this is the proudest accolade for the team and me. I’ve recently moved to the US and travelled far and wide both here and abroad this year and I can genuinely say that Whisky & Alement is world-class and a real gift to Melbourne. It’s not the hundreds of whisky on choice – though that’s important. It’s the team and their knowledge and passion to provide an experience for those that walk through the door, on the patron’s terms – perfectly matched to where they are at on their whisky journey. It’s exactly what inspires us every day – to offer people a deliciously accessible whisky that meets them where they are at. And I reckon that common link might just have been the reason why – amongst such amazing whiskies from around the world – Melbourne chose us.“

Scroll down to see Melbourne’s top 25 whiskies of 2019

If you came in house to cast your vote, thank you! You may be wondering what the other 4 drams your ‘Peoples Choice’ flight were, well, wonder no more. Find out Melbourne’s top 5 and beyond, below.

While the world of whisky constantly evolves, we saw our long-standing pillars of the industry meet some worthy competition in 2019. So, Whisky & Alement would like to raise a glass in celebration of one small, family owned and operated, Australian distillery. This is an Australian distillery that from their first release in mid-2017, have now gone on to land their Bourbon Cask expression in the top 30 highest selling whiskies for 2019.

A beautifully crafted, small batch single malt, that sits snugly on our list between highly revered institutional powerhouses such as Yoichi and Balvenie.

This is an epic feat, but more than anything else, a testament to the consistency and incredible balance Cam and Suzy Brett achieve in their spirit, release after release. Sweet and and fruity, this is a spirit that immediately caught the noses of Whisky & Alement staff on a trip to Spring Bay Distillery late last year. It is our absolute pleasure to bestow the W&A Team Encouragement Award for 2019, to Spring Bay Distillery. Keep on doing what you’re doing, Cam & Suzy, it’s working!