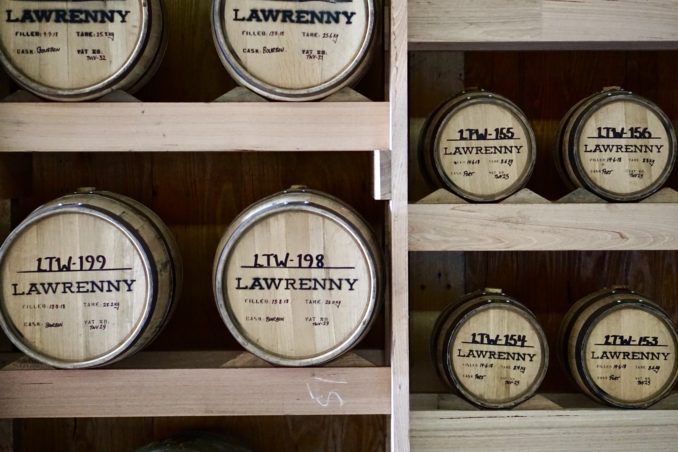 A couple of weeks ago, the team at Whisky & Alement travelled down to Tasmania for our annual staff trip. We first started making these pilgrimages to Tassie in 2011, and it’s staggering to see how much the whisky and spirits industry has changed over that time.

On this trip, we endeavoured to seek out the up-and-coming distilleries that are just starting to make a name for themselves, and we were lucky to taste some fascinating whiskies in the process.

With more time, we wish we could’ve dropped in to a number of other distilleries, both established and emerging, but here’s a snapshot of some of our favourite new Tasmanian whisky distilleries to be on the lookout for. 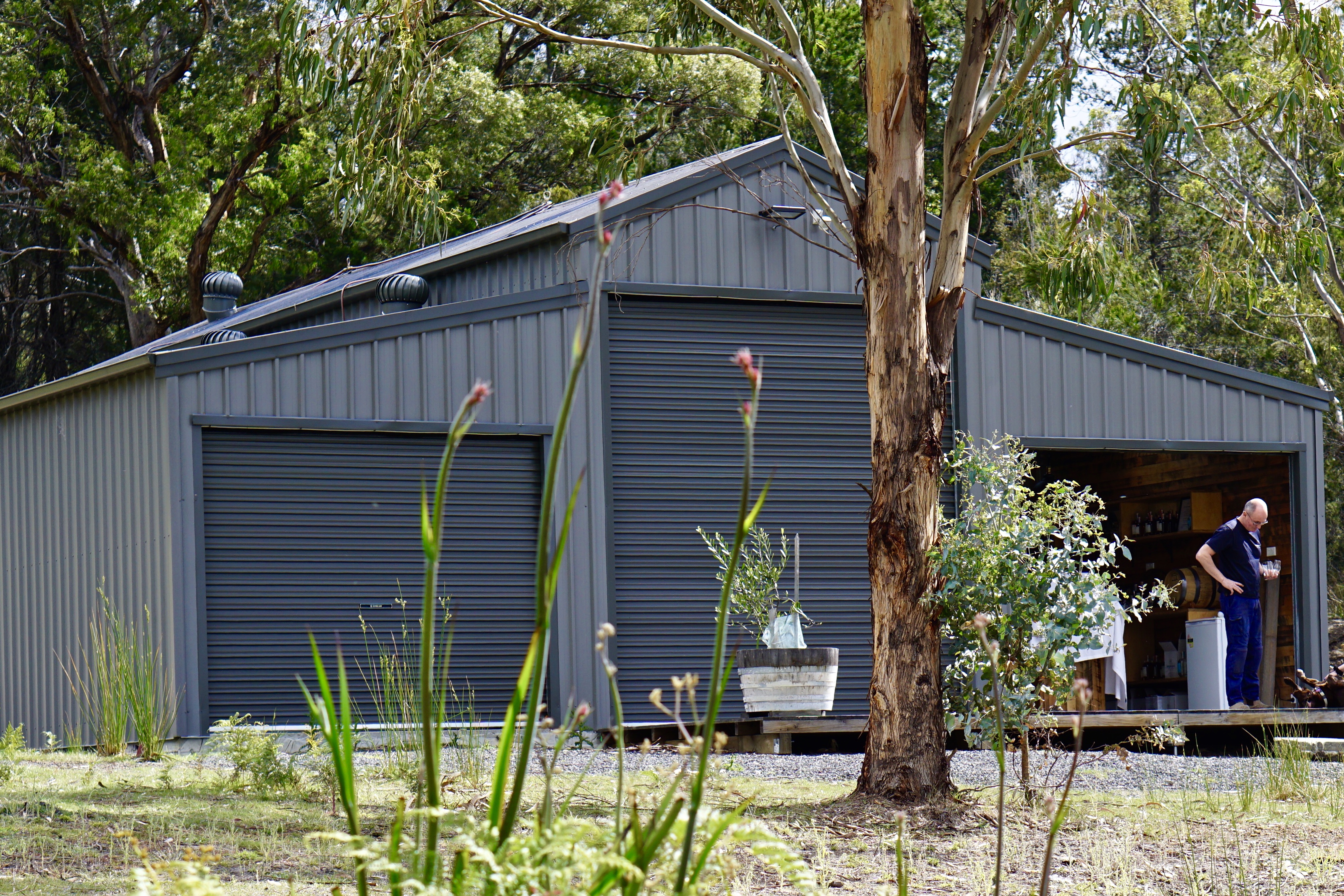 The W&A team first tasted Spring Bay’s bourbon cask release in 2017, and we were amazed at what we found. All of a sudden, here was a creamy, floral, honeyed, almost tropical fruit-forward single malt coming out of Tasmania – and it was only two years old!

The distillery was a must visit on this trip, and we were warmly welcomed by Cam Brett, who, along with wife Suzy, has created a tiny distilling oasis on Tasmania’s east coast. Located a little over an hour northeast of Hobart, Spring Bay specialises in single malt whisky and gin, and since 2015, they’ve quickly established themselves as one of Tasmania’s most impressive small scale operations.

One 1200 litre Knapp Lewer pot still built by Peter Bailly’s Hobart firm handles the entire work load, and we definitely recommend a taste of the full Spring Bay range: the gin is rich and silky, and the malt whiskies, matured in bourbon, tawny (the cask strength ‘ The Rheban’ is a stunner) and apera casks are well worth seeking out. 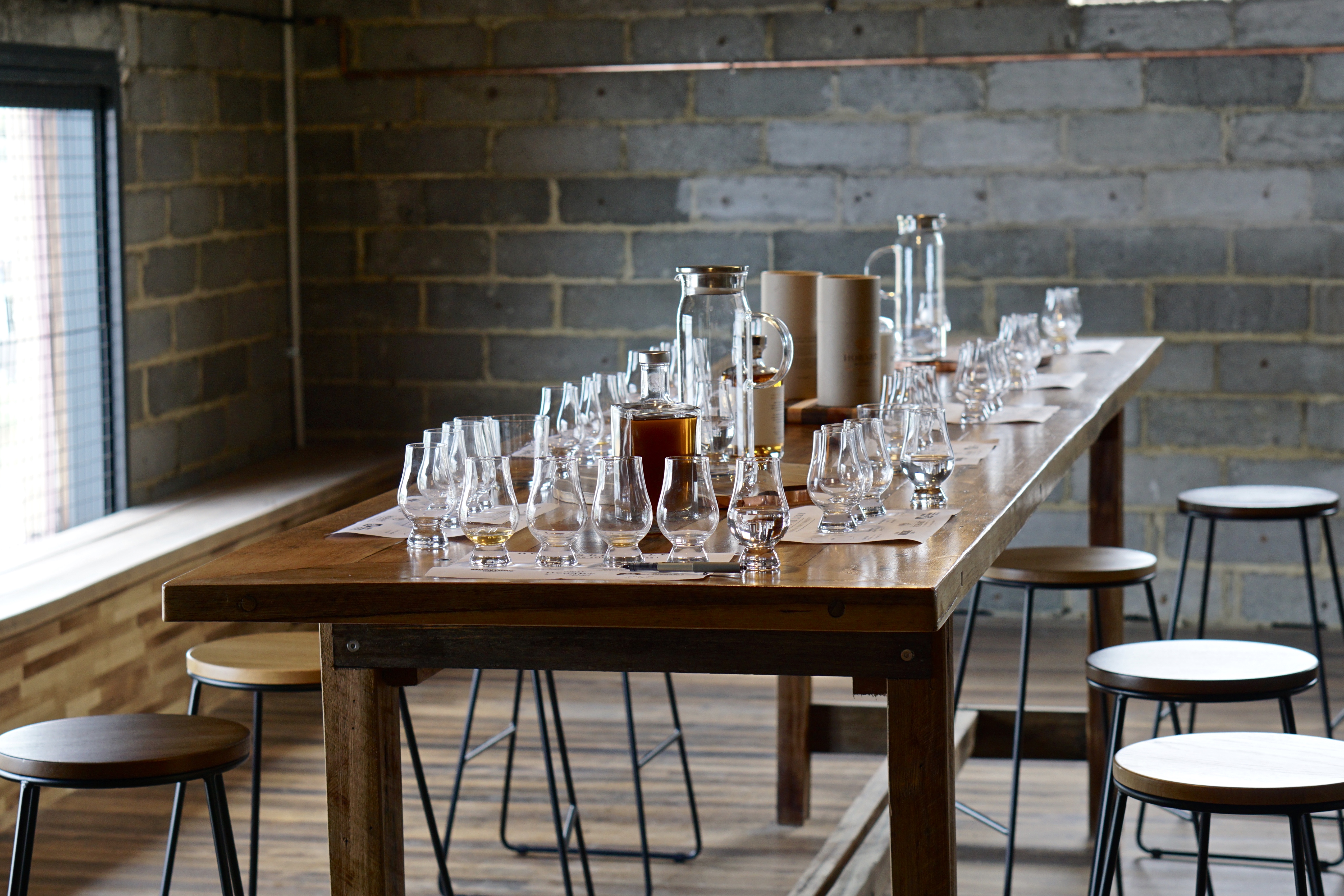 When we first pulled up to the industrial warehouse that is Devil’s Distillery, tucked away in a suburb in Hobart’s inner north, we had no idea what to expect. But when we walked inside we immediately inhaled the angels share – or devils cut, more appropriately – and knew we were in the right place.

We were greeted by John Jarvis, the distillery manager, and he gave us a tour of the operation: another lone Knapp Lewer still producing malt spirit that’s matured onsite in a combination of different bourbon and wine casks.

Hobart Whisky, the first bottling released from Devil’s Distillery, recently caused a stir in Edinburgh when owners Brooke and Jules poured it alongside some of Australia’s top whiskies. It was lauded for its balance between spirit and oak: the clean, fruity distillate – at Devil’s they take an earlier cut than many other Tassie distillers – was matured for 2.5 years in ex-Hillrock bourbon casks (a bourbon we love at W&A) and the Scots were impressed.

Tasmanian Malt Barrel Aged New Make is also created onsite, which the W&A team loved. This almost-whisky – it hasn’t quite reached the required two years in barrel yet – was seriously tasty and great value for money, which we also love. 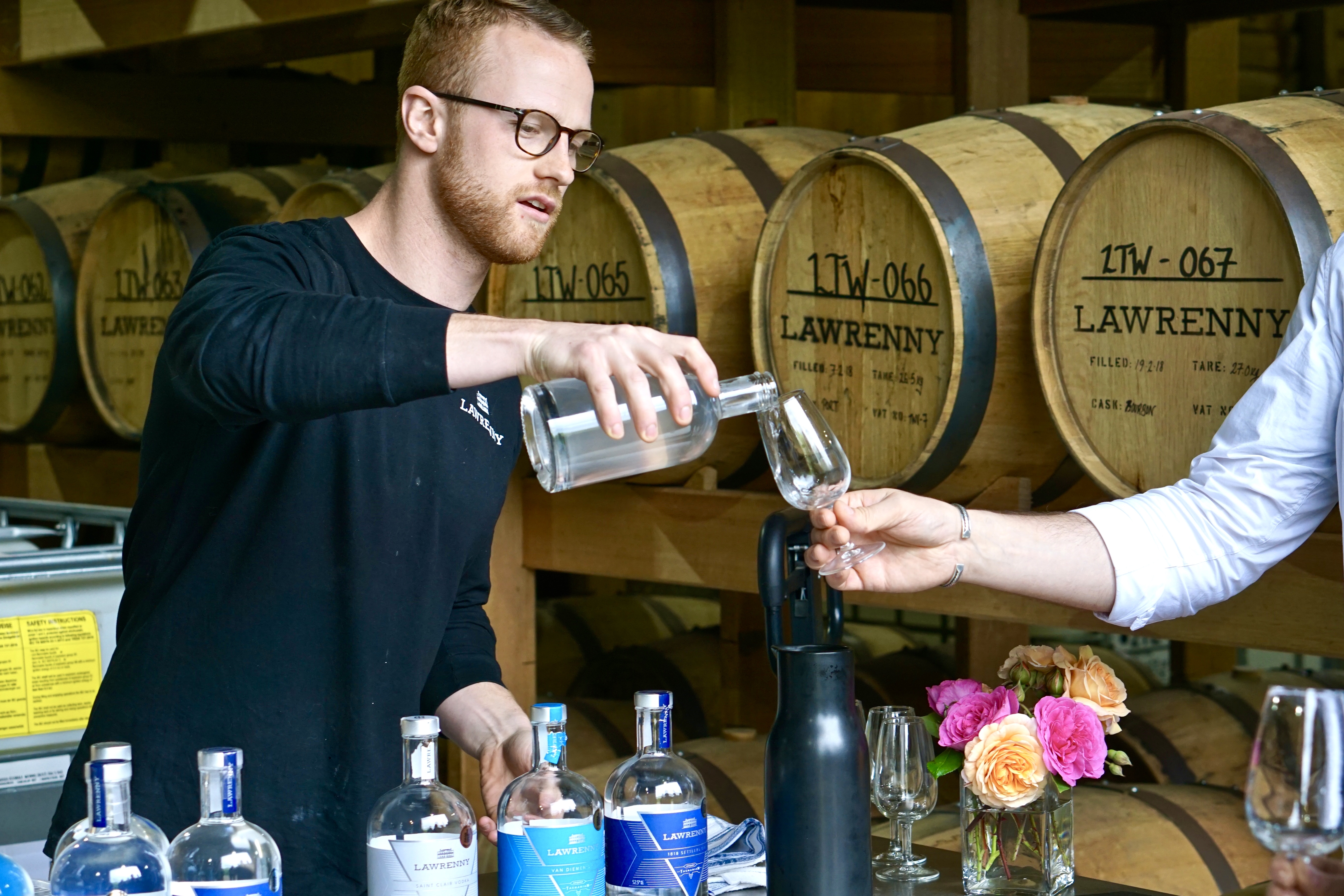 Next, we headed just over an hour northwest of Hobart to the Central Highlands and the Lawrenny Estate. There’s a number of distilleries vying for the most picturesque in Tassie – add Lawrenny to the list.

The estate traces its roots back to the early 1800s, when cattle tycoon Lt. Edward Lord established Lawrenny in 1818. The Mace family took over in 1991 and in 2016, Lawrenny Distilling was born. Utilising the fertile lands of the Derwent Valley, Lawrenny plans to established itself as another paddock to bottle whisky producer in Tasmania, and soon their barley harvests will be malted, mashed, fermented, distilled and then matured onsite.

Until then, spirit made from Tasmanian malt is maturing away in apera, tawny and a large number of bourbon barrels, and head distiller Joe Dinsmoor, drawing on his experience from Lark and Archie Rose, has some fascinating plans for their first whisky release, due in 2019 – one to watch out for. 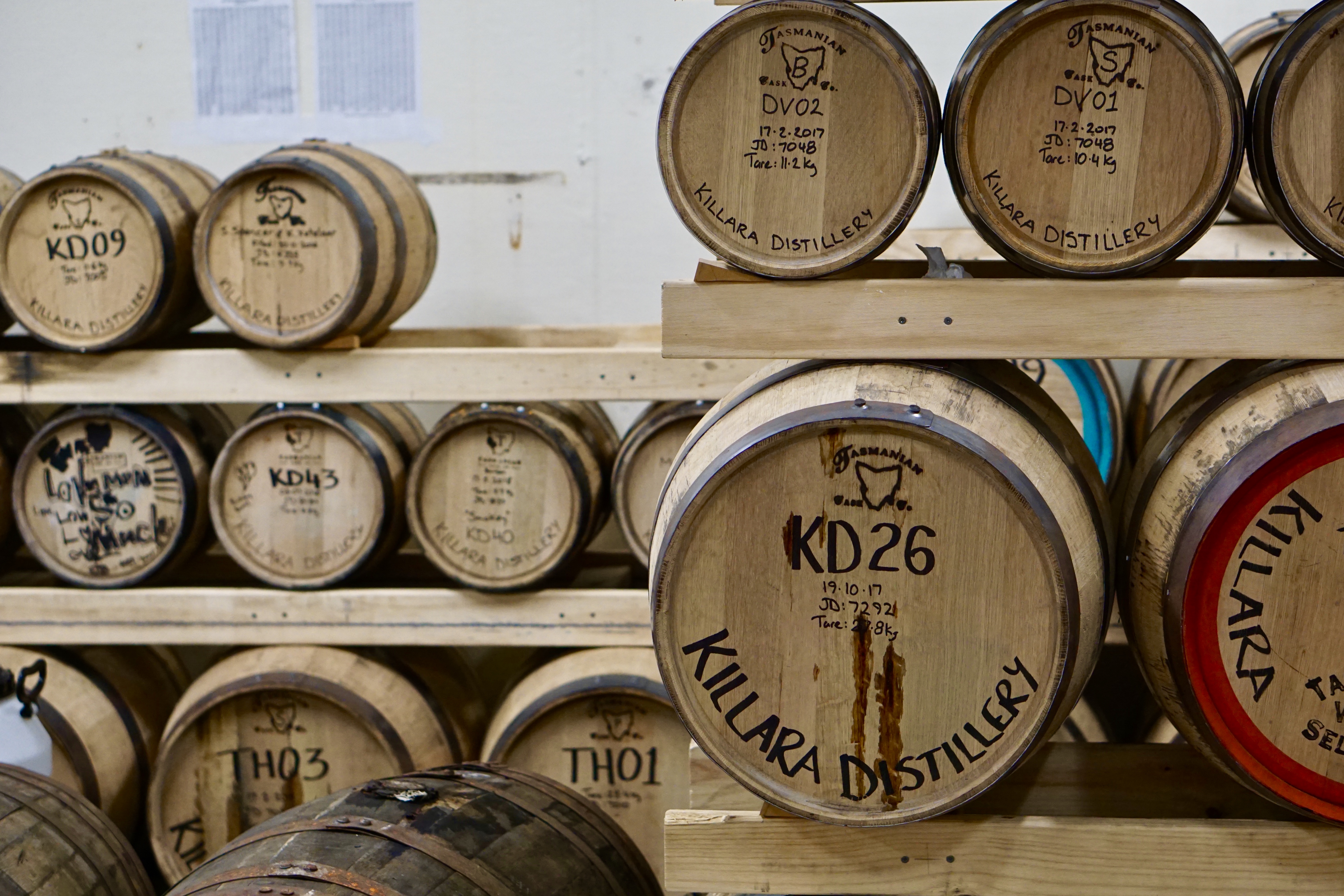 Back towards Hobart, we were lucky to then visit Killara Distillery. Killara was established by Kristy Booth-Lark a few years back, and since then, she’s been steadily filling various 20 and 100 litre barrels and patiently waiting for time to work its magic.

For those not aware, Kristy is the daughter of Bill and Lyn Lark, the pioneers of the Tasmanian whisky industry we know today, and she’s used her nearly 20 years of experience in the distilling industry to create her own take on what a Tasmanian whisky can be.

The W&A team absolutely loved the thick texture and viscosity of Kristy’s new make spirit, produced using one of her parents early stills. And some of the Killara single malt we tasted had a rich, almost meaty character reminiscent of some fantastic Tasmanian and even Scottish malt whiskies.

For the moment, Killara is located in a shared space with other distillers and breweries, but plans are afoot to create a purpose built distillery in Richmond. And if you’re you’re interested in purchasing some of Kristy’s very limited single malt whiskies, get in contact via her website. 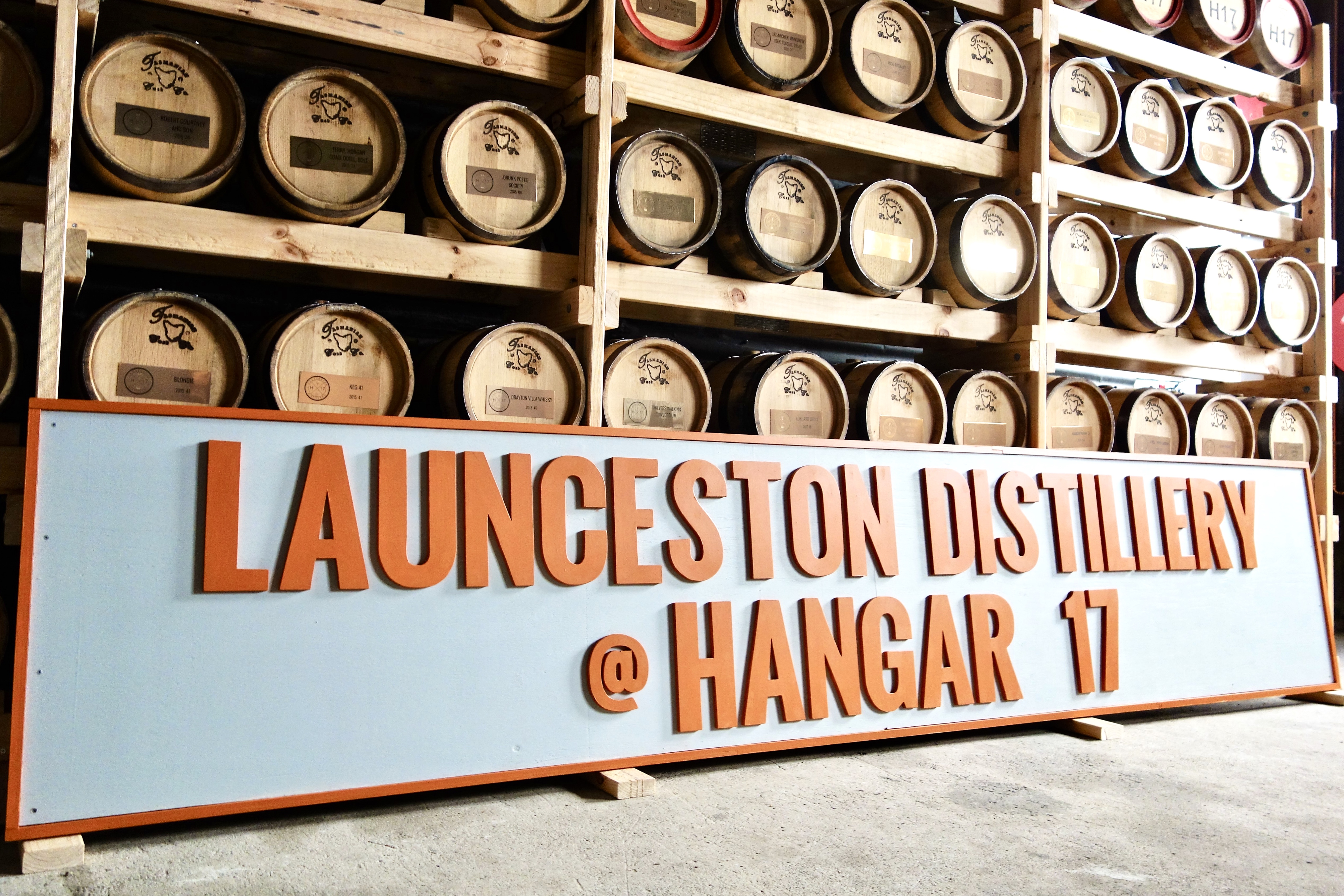 While we didn’t quite make it to the Launceston Distillery on this trip, we so enjoyed drinking their whisky while in Tassie that we had to include it here.

We first visited Launceston Distillery in 2016, and at that stage they were still a couple of years away from releasing their first whisky to the public. But in August of this year, we put their first apera and tawny cask matured whiskies behind the bar, and the response has been overwhelmingly positive.

Operating out of an historic aviation hangar, the distillery is helping to establish the north of the state as a noted area for whisky production, following on from stalwarts Hellyers Road, and joining newcomers like Adams Distillery and Corra Linn.

While their first releases sold out quickly (we still have a little bit left behind the bar), more bottlings are due for release before the year’s end if you’re keen to get a taste.

Finally, a huge thanks to all the brilliant Tasmania’s who gave us their time, their passion (and their whisky).