Feature Flight: The flavours of American oak, the quirky quercus 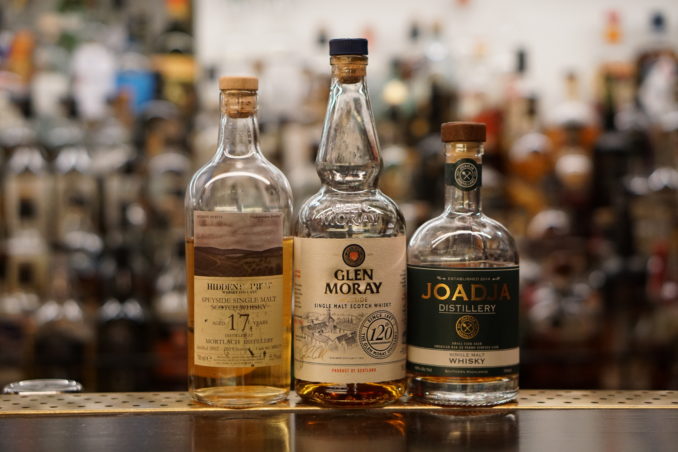 American Oak has been underappreciated as a Scotch whisky cask by the greater whisky community for quite some time, all the while, being used to mature about 90% of Scotch whisky.  Many producers are using these casks for an initial maturation, then transfer the spirit into a finishing cask. In the flight following we will explore the many flavours of American oak, from ex-bourbon cask, to brand new oak, and finally finishing with an American oak cask that has held Sherry. Before we do that, I will give a brief overview of American oak and its species.

American Oak is a broad range of Oak species that are native to North America.  The most common species being used is Quercus Alba,or White Oak. Grown quite liberally in the central and eastern states of North America, spanning from East Texas to Florida, all the way up to Quebec and Montreal. Favoured for its relatively rapid growth compared to other oak species – growing to maturity in 20 years – its wider grain allows it to be sawn instead of split, increasing the volume of usable timber from one tree, and finally, its mellow tannin structure and pleasing Vanilla overtones.

The other species of American Oak used for casks in the United States are rarely seen, but can create very unique whiskies. Quercus Garryana,or Oregon Oak, has had a rise in use over the last 10 – 15 years with Oregon Oak being utilised in several releases from select distilleries in the United States, e.g. the Garryana release from the Westland Distillery, or the McCarthys Oregon Single Malt from the Clear Creek Distillery, both of which, have graced the bar at Whisky & Alement. One species we have been seeing a bit of recently is Quercus Muehlenbergii, or Chinquapin Oak, with releases from distilleries like Glenmorangie in 2005, and Jura, GlenAllachie and Teeling in the last 12 months.

In this flight, we are looking at three whiskies that have been matured in casks made from White oak, Quercus Alba, and as mentioned before, each cask has been treated differently, creating different expressions of American Oak.

First up we look at Bourbon cask maturation:

Mortlach is a distillery is famed for its convoluted distillation regime which leads to a meaty, sulphurous spirit, typically matured in sherry casks. A whole new world is opened up for this distillery in ex-Bourbon casks. Meaty falls by the way side, and the sulphurous nature of this spirit tends to present itself as oily and nutty, laced with peaches and apricots.

Ripe apricot skins and vanilla soy candles come across immediately on the nose, followed by rolled oats and dried peaches. Incredibly nutty with dry roasted almonds and peanut shells, and after quite a bit of time in glass, a faint beef stock aroma with oranges and toasted coconut.  On the front palate, ruby red grapefruit, apricot and peaches in vanilla yoghurt. A waxy texture like nectarine skins carries the fruity front palate through to a coconut oil and beef stock finish. Almost reminiscent of an older Clynelish or Springbank. An absolute winner.

Until 2008, Glen Moray was treated as the testing ground for Glenmorangie, trialing casks that have held unique wine varietals to casks that were toasted and charred to different levels.  This has led to a flurry of incredibly unique independent bottlings. This experimentation continued and evolved following 2008, allowing for an incredible core range to develop with some really interesting limited releases.  This particular release, which was sold in the distillery shop for the celebration of their 120thanniversary, was initially matured in an ex-Bourbon cask, then filled into a brand new American oak cask that had a level 3 char.

Pastries, cakes and sweeties explode out of this spirit, toasted coconut panacotta, blueberry pie, crème brulee and butter tablet to name a few.  This incredibly rich nose is balanced out with a beautiful note of tung oil, peanut shells and, after some time in the glass, old cedar furniture. The old cedar furniture continues on the palate, with dark plums and brown sugar. Incredibly nutty on the mid palate, with hints of roast beef, a beautiful vanilla slice, and tung oil finish.

Joadja was founded in 2014 by Valero and Elisa Jiminez, Valero and Elisa both emigrated from Spain at young age, and found themselves in the southern highlands of New South Wales. Their spirit is matured in casks that have been used to mature Sherry, which is shipped to Australia from Spain and bottled. Utilising casks made from American oak to mature the Sherry leads to some really unique flavours, while still retaining an unmistakable, Aussie identity.

This is definitely an Aussie malt, rich and dense on the nose, bursting with dark fruits and molasses while the obvious cereal backbone presents itself as a coconut and honey muesli bar.  After some time in glass, an earthiness develops with notes of Jarrah wood shavings and campfire damper.  The front palate gives us faint memories of Ovaltine and that one time I burnt a tarte tatin.  Beef stock connects the nose to the palate, which then develops into roast beef drippings on the mid. Ovaltine comes back in a big way on the finish. Very moorish.