1. Walk into our virtual bar with host Shane Larkins – coming soon to Instagram…

Peat has long been a part of the Scottish landscape, lifestyle and, of course, its whisky. You cannot wander the Scottish countryside without seeing mounds of freshly cut peat laid down to dry, whether for someone’s fire or to make its way into some of our well-loved whisky. So, what is peat? Peat is thousands of years of slowly decomposing organic material that accumulates in waterlogged bogs and swamps. In these acidic and nutrient deprived areas moss, heather, bracken and trees slowly break down and produce different layers of peat that can create unique smoke flavours within our whiskies. Peat was an integral part of early whisky production as a fuel source for early stills and, more importantly for drying the barley during the malting process.

During the drying process, chemical compounds called phenols (isomeric cresols, guaiacols and xylenols) are released by the burning peat and absorbed into the malt. These are the main compounds that contribute to the many tastes of smoke/peat.

The main place we hear about phenols is when distilleries talk about their ppm (phenolic parts per million). This is the way we measure the phenolic content of a whisky. Lightly peated whiskies are about 15 ppm, moderately peated is up to 20 ppm and heavily peated is 30 ppm and above. Some of the classic “unpeated” whiskies can contain phenols that measure 1 to 5 ppm. Distilleries largely measure ppm after the malting has been completed, but distillation and spending time in the cask lower the ppm. Chemically speaking peat is made up of carbohydrates, guaiaclys, syringyls, phenols and nitrogen compounds. And it’s the phenols that we are most interested in. Phenol and cresol compounds make up most of the smoky flavours we find in Islay styles. The medicinal flavours are generally contributed by three cresol compounds called ortho-cresol, meta-cresol and para-cresol. These compounds also contribute to the earthier, musty and woody characters. Guaiacol is another chemical within peat. It has several different compounds, some of which create a sweet smoke flavour that we associate with highland peat, while others create big meaty flavours of hickory and pork crackling. Another sweet smoke is created by xylenols which have a nutty and sweet medicinal smoke. Sometimes we can also get cinnamon, cloves and spices from peat smoke in the form of eugenol compounds. Eugenol is also a compound that appears in our casks.

The time that the barley has spent within the kilns will directly contribute to the amount of phenols absorbed by the barley. The average time for barley to spend in the kiln is 24-72 hours, however for whiskies such as Octomore it can take up to 5 days. The proportions of the milling of the barley also contribute to the flavour, as the smoky phenols attach themselves primarily to the husks of the barley. So a higher proportion of husk in your wash will increase the phenolic content. When distilleries create their new make, they must balance their cuts to create their desired flavour. With peated whiskies we have to look at the last third of the hearts, and the tails because this is where most of our phenolic compounds can be found. But go too far into the tails, and you may get the undesired flavours of boiled cabbage and burnt rubber. If we look at Caol Ila and Lagavulin, who use the exact same malt from Port Ellen, Lagavulin have quite a long middle cut to create their heavier smoke characteristic, while Caol Ila have a shorter cut and produce a sweeter, less medicinal smoke.

These days we talk about the terroir of peat. Where we source our peat will greatly change the organic matter that it is made up of and therefore change the percentage of phenolic compounds within it. The peat used in Scotch whisky malting’s is sourced mostly from the north-east of Scotland, Islay and Orkney. On Islay, the peats mostly consist of moss, coast plants and salt and are richer in phenols, guaiacol, vanillic compounds and nitrogens but are poorer in carbohydrates than peat from the mainland. Whereas peat from the mainland contains a lot more bracken, heather and tree material. Wooden stemmed plants have more cellulose and hemicellulose which decompose into simpler carbohydrates and therefore create a peat that has less phenols and create a lighter smoke. On Orkney we have an interesting peat where most of the top peat consist of heather and moss, whereas the bottom layers consist of peat similar to Islay peat. Peat from Orkney has more carbohydrates than Islay peat but more phenols than Highland peat.

So lets dive into some of these different peat styles! 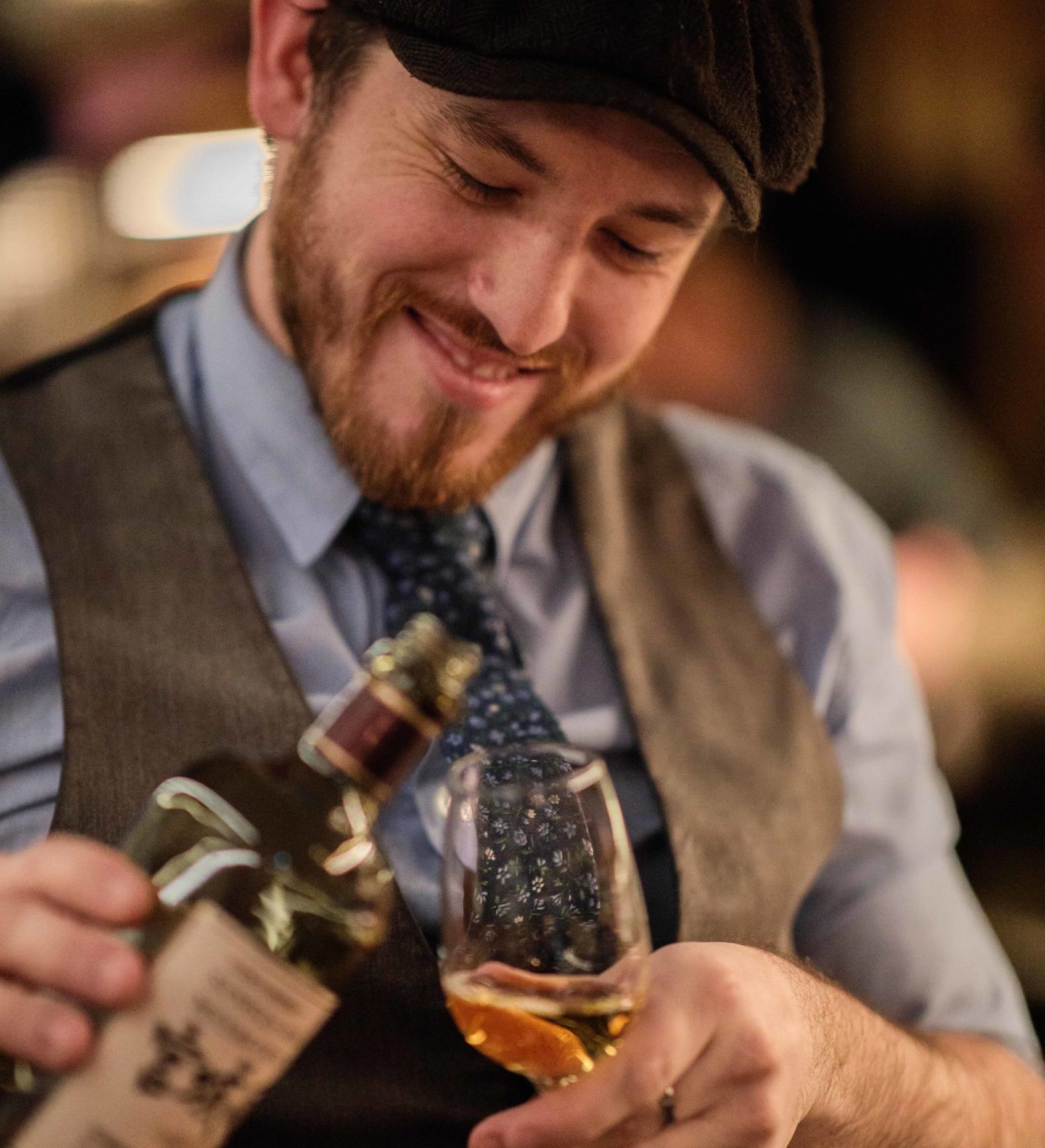 Highland Park is one of the rare distilleries that has its own malting floors. Over their five malting floors, Highland Park malts 36 tonnes of barley each year. The barley’s phenolic content is 30-40 ppm and uses the top layer of peat from the local Hobbister Hill. This accounts for 20% of the barley used at Highland Park. The other 80% is brought in from the mainland malting house Simpson’s Malt and is unpeated. The two varieties of barley are mixed together before mashing to bring the phenols down to 10 to 15 ppm. As this is an older bottling, we can expect the ppm to have gone down as bottled whisky loses some of its phenolic flavours over time.

The whisky starts as old parchment, a trait that many old bottles have but then opens up to yellow peaches that are roasted in their own juices. The nose continues to open up to being on a lavender farm with hedges of heather. Fresh chicken noodle soup with a glass of orange soda. The palate is slightly close and is clear that some old bottle effect has taken place softening the flavours of black salt and hot sand. However, the whisky is still dense with the tannins from olive skins and red grapes. The smoke is just a whisper of old coal dust and charcoal. Sweet caramel jersey and chocolate digestives add to oily dense texture. Finishing on salted caramel covered in milk chocolate and slight rubbery dryness.

From one of the biggest, although, little seen distilleries. Ardmore is a beast of a distillery producing 4.5 million litres of spirit year. However, we hardly see this whisky bottle as a single malt as most end up in the Teacher’s blend. Unlike most large distilleries, Ardmore uses a locally sourced peat from St Fergus which is used to malt the barley in local independent maltsters to a 12 to 15 ppm. This single cask aged in an ex bourbon barrel from the Italian Independent bottler Hidden Spirits gives us a fantastic glimpse into the peat style of Ardmore.

This reminds us of sitting by a campfire when it suddenly starts to rain. It wafts wet burnt wood with pipe tobacco and creamy biscuits. On the palate, chewing on toasted cereals that have been cooked over an open fire with white ash clinging to it. It becomes creamy earthy and dank like being in an underground den eating bitter chocolate nibs with a side of vanilla slice. Finishing dry and ashy akin to pulling on a hookah with bitter chocolate.

As one of the youngest distilleries on Islay, Kilchoman is a true farm-to-bottle distillery. 25 to 30% of the barley used at Kilchoman is grown at the distillery’s farm. This barley is then malted by hand on the distillery’s own malting floors. The barley is malted to 30 ppm using a local peat from Duich Moss. This is then distilled separately from the remaining malt coming from Port Ellen that uses peat from Castlehill and is malted to 50 ppm. This particular Kilchoman was released in 2019 and is a 9 year old. This whisky is a vatting of 33 casks made up of 30 fresh bourbon barrels and 3 oloroso sherry butts.

The nose provokes images of being in the tropics looking over hot white sand next to an infinity pool with soft smoke of roasted peanuts and a fresh piña colada. We switch to the palate where we are hit with a fresh sea spray and lemon being squeezed over seafood and capsicum sprinkled with cumin and paprika. The sherry cask adds a soft sultana fruitiness and builds to a spicy sugared peat. On the finish we experience fresh lemon twist and sweet peanut smoke. Very moorish